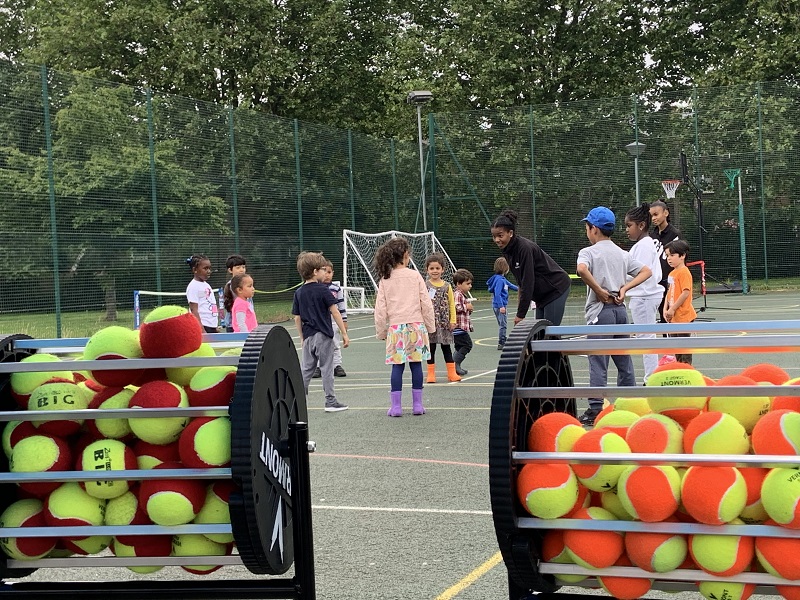 Earlier this year the JRF Team were pleased to add Tennis to the menu of sports on offer at Bridgestone Arena, thanks to two local ladies – Leeta Segalov and Mona Fine, and their love of the sport and desire to give back.

Leeta was introduced to the CEO of the Foundation, Otis Roberts, and with her background in tennis after starting to play in her 40’s and through coaching, improved her game to the level where she represented Great Britain in the 2015 Maccabi Games in Berlin, believed she could help to support JRF’s goal to add Tennis to their multi-sports offer.

Having lived for over 20 years only yards away from the community hub the Foundation operates from, Leeta knew that the JRF had great facilities including an all-purpose sports court marked for various games including tennis, which would allow for a Tennis programme, but also knew that JRF had limited resources to provide suitable equipment and trained coaches, including disability coaches, to deliver a quality programme.

Leeta therefore proactively reached out to her tennis contacts, friends, and family to raise much-needed funds to launch the Tennis programme by setting up a GoFundMe campaign https://gofund.me/2d5fb705. She quickly raised £6,000 towards the target of £12,000 which enabled tennis equipment to be bought, and the Tennis Programme to be launched by the end of May.

Leeta knows first-hand what it’s like to not have access to sports facilities and considers that she was lucky to be able to afford professional coaching when she wanted to improve her game. She recognises that not everyone has the same opportunities, saying; “ I firmly believe that Tennis including qualified coaching should be available to anyone who wants to play, not just to those fortunate enough to afford lessons, as well as the equipment. My goal, with the help of additional funding, is to give local children continuity of lessons and coaching and to roll this programme out to other grass roots sports clubs across Brent to enable more children and young people to benefit from the programme.”

Mona added; “After only 6-weeks of starting the Tennis programme which is available to children from 4-years upwards, we have been delighted by the enthusiastic response from the local community. The 45-minute sessions are already over-subscribed with over 50 children taking part on a regular basis. As such we have had to increase the number of sessions to 5-days a week to accommodate all the participants.”

In July, to tie in with the Men’s Single Finals at Wimbledon and to harness the excitement and passion of the game in young players on the Tennis programme, and their families, JRF hosted a family Wimbledon tea party at the community hub, which was enjoyed by everyone who attended, and was covered by The Voice newspaper.

During the recent JRF Summer of Fun holiday programme, Leeta and Mona delivered a Holiday Tennis Camp on Tuesday, Wednesday, and Thursday mornings over the 5-week programme which was well received by the participating children. The Tennis Camp ended with a buffet lunch for all the children who attended, and they were each awarded with a JRF branded t-shirt with their names printed on the back.

Both Leeta and Mona have completed the LTA Level 1 coaching course and Mona took part in the emergency First Aid Course arranged by the Foundation.

The Tennis programme continues to grow with new participants joining each week and Leeta says; “We look forward to continued growth and putting more smiles on our children faces.”

If you would like to donate towards the Tennis Programme, please follow the link to Leeta’s Fundraising page GoFundMe, https://gofund.me/2d5fb705