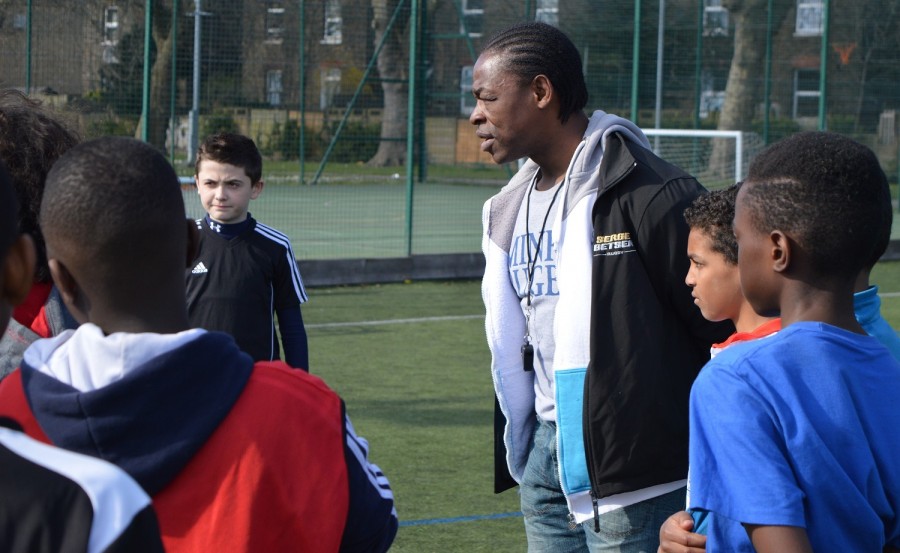 Serge Betsen Rugby (SBR) was created in 2015 as part of Serge Betsen Consulting, to teach rugby and multisport to young people through a unique method mixing French and English standards and values.

SBR is a coaching programme that Serge Betsen created by going into schools and introducing students to the game. Since its creation, many partnerships were built to expand on their work, including the Jason Roberts Foundation.

The partnership rugby programme is delivered by SBR at JRF’s main delivery hub; the Pavilion in Stonebridge, where JRF has been delivering its programmes since 2007 engaging hard to reach young people aged 11-25 years old.

The programme is committed to use this unique sport to engage the local youths, enabling them to try out a new sport, keep them off the streets and out of trouble.

“This is an incredible programme that both my team and I are extremely happy to be a part of,” Said the former London Wasps player. “I first met the CEO; Otis Roberts, at an event in October last year and we started to talk about the work JRF is doing with young people and he expressed the Foundation’s interest in rugby.

“We both quickly realised that we are very passion about sport and how we can use sport to change young people’s lives for the better. In just a few months the rugby programme has already had an impact on many young people.

“You can tell that these young people have been coming to the JRF for years, but for the first time ever they have been introduced to rugby. The reactions we have had from the young people are fantastic.”

Betsen and his team delivered their first rugby session for JRF in January and they have since been involved with three half term programmes and weekly sessions.

Jason Roberts MBE, who is pleased to see the rugby legend coming on board as a partner, said: “It is an absolute pleasure working in partnership with Serge and his team.

“Their vision about using sport to changes lives falls right into our line of work and it has also been amazing having Serge’s support around events the Foundation has accommodated.”

The JRF hosted a Women’s Celebration Day in March as a part of the International Women’s Day at Ark Academy in Wembley.

The event was attended by more than 120 young females, who were introduced to six different sports and workshop on leadership with successful business women.

Betsen made a surprise visit at the event to show his support to the Foundation and Jason.

“It is incredible to see so many young females turning up and playing different sports all thanks to Jason and his Foundation,” Said Betsen. “The appeal of sport lies in its ability to bring people from various backgrounds together.”

Following a very fruitful start to the partnership, Betsen was invited to the JRF’s Celebration Dinner in April to sit on the sofa panel with Jason Roberts, Michail Antonio and Kelly Sotherton.

The panel was asked questions about their professional sports career and Betsen proudly talked about what rugby has given him and his family.

His career includes 63 international caps for French, 172 caps for Biarritz Olympique and he finished his career in London playing 79 games for London Wasps.

“Seeing so many people supporting the Foundation is incredible and it gives me a great pride to be asked to be on the sofa.

“This is only the beginning of a great partnership which strives to deliver positive activities and role models in the heart of our communities to improve young people at risk no matter of race, ethnic or ability.”