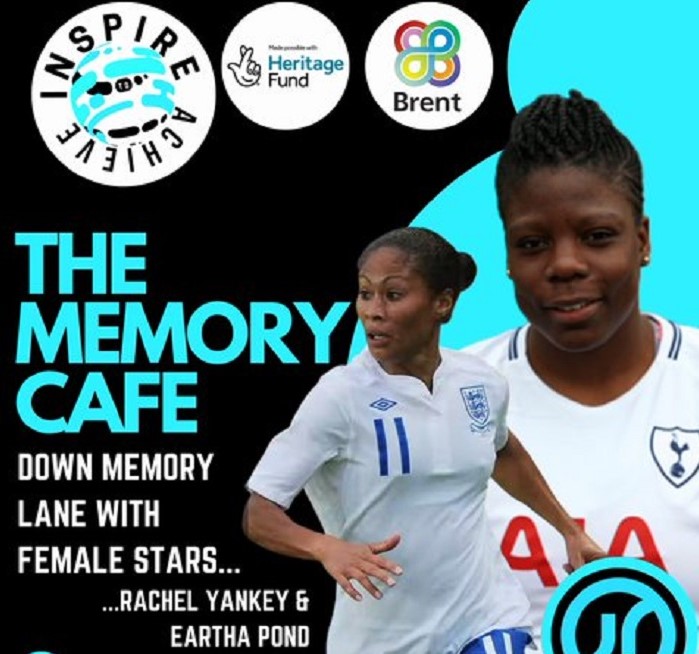 As part of the JRF Inspire to Achieve Heritage Project funded by the National Lottery Heritage Fund, the afternoon’s sporting event included a special Memory Café where the audience heard from Eartha and Rachel about growing up in Brent and their journey to becoming professional footballers.

With England’s Lionesses playing in the UEFA Women’s Euros 2022 semi-finals only days away, this all-female Memory Café was the perfect time for the women competing in the day’s football tournament to be inspired by these two players who made such a significant contribution to Women’s football both Nationally and Internationally.

Some amazing questions were put to the former defender and left winger who both played at the highest level in Women’s football from a young age, and with Eartha’s role on the FA Women’s Football Board one of the audience members wanted to know what the FA’s plans are to maintain the momentum of the UEFA Women’s Euros competition and keep the focus on girls entering the sport.

Rachel who played for clubs including Arsenal and Fulham and who won her first England cap and goal at the age of seventeen, was the first professional female player registered in England, revealed that she had first been spotted by the head coach of the male team.

Eartha who joined the women for their training session ahead of the tournament, played for clubs including Chelsea, Everton, and Tottenham Hotspur, and surprised the audience when she spoke about having to work whilst pursuing her career in professional Women’s football, and that she was a sports teacher and Assistant Vice-Principal at the local Crest Academy.

The insightful Q&A session uncovered stories of the resilience young women like Rachel and Eartha had to display when Women’s Football went from grassroots to elite level in what was then a male-dominated sport. The audience appreciated the contribution these two former professional players have made to Women’s football and how they and the current Lionesses have raised the profile of Women in football and have opened the door for future generations to pursue a career playing football professionally.

The day ended with a fun Heritage Quiz with a focus on Brent, and with excited anticipation of the forthcoming Women’s semi-final on the 26th of July.